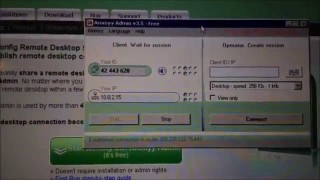 There’s lots of people that like to torment telemarketers.  Some of the telemarketers are businesses that violate a variety of Telephone Consumer Protection Act laws and associated FTC regulations.  Their services may be a little dodgy, but if you’re not happy, there are options.  Then there are the pure scammers.  Those people, often foreign, are simply trying to steal from you.  Often using bank transfers, money transfers, and Green Dot Cards, once they get your money, it’s gone.  They claim to be from the IRS, long lost relative needing “help”, or have an unpaid debt. Or in this particular case, claim to be Microsoft helping you out with a problem virus on your computer.  Knowing this, some people like to have fun with them.

Be Jordan U, a YouTube user that seems to have a penchant for fans.  Jordan is also pretty tech savvy, and knows his way around a computer. I have friends like Jordan, and they can be great to hang around.  Don’t be Scammer, presumably a person from India who wants to scam Jordan with false claims his Windows computer has a virus.  Jordan feints shock and concern and camera in hand, clumsily does what the scammer wants.

Jordan goes to his computer, and it’s a Mac.  He runs VirtualBox and boots up a Window 2000 Virtual Machine.  You know this is going to be good, so start getting the popcorn ready.

Jordan has a lot of fun with the Scammer. Getting them to spell URL’s really slowly. Fumbling with problems with TeamViewer on such an old version of Windows. Playing with the mouse and keyboard while the Scammer is remoted in, messing him up.  Asking if he can download more memory.  And finally, after 30 minutes of teasing, the Scammer starts to go for The Close.  It doesn’t end well for him.

If you don’t want to watch 30 minutes of fumbling by the scammer, skip forward to 33:00 mark. This is where Jordan provides the “Credit Card” number, but oddly, his includes letters. The Scammer realized he’s been played.  This is where is gets Not Safe For Work, since the Scammer starts using very colorful language regarding maternal carnal knowledge.

Oddly enough, the Scammer can’t just accept defeat and move on to greener, more naive, pastures.  After cursing out “Bob Jones”, he still demands a credit card number. After hanging up, the Scammer opens Notepad and continues to try to insult Jordan.  Using the same maternal insinuations as before.  Seriously, Scammer needs to get out more and get a wider repertoire of insults.

Well done, Jordan.  For 42 minutes, you’ve just saved a little piece of the world from a scammer.

Posted in Humor, On The Web, Torments | Tagged: scam, Telemarketers, virus
« Telemarketers Press 1 Campaign Revisited
Telemarketer Says This Isn’t a Sales Call, But It Is »